Chandigarh, May 15
To promote zero-emission mobility, the UT Administration will provide incentive in the range of Rs 3,000 to Rs 2 lakh to the first 42,000 buyers of electric vehicles (EVs) of all categories, including e-bicycles and four-wheelers.
Petrol pumps to set up charging stations
The draft policy has proposed that EV charging infrastructure will be mandatory for all petrol pumps (both private and government) operational in Chandigarh in six months from the issuance of the final EV policy. If space is not available with the petrol pump, the owner will make necessary arrangements for installing charging stations in some nearby parking area belonging to the UT.
Fixed battery capacity
The incentive will be given at the rate of Rs 5,000/kWh capacity of the fixed battery for all categories of electric vehicles except e-bicycles and e-four-wheelers (commercial) as proposed in the Draft EV Policy notified recently. 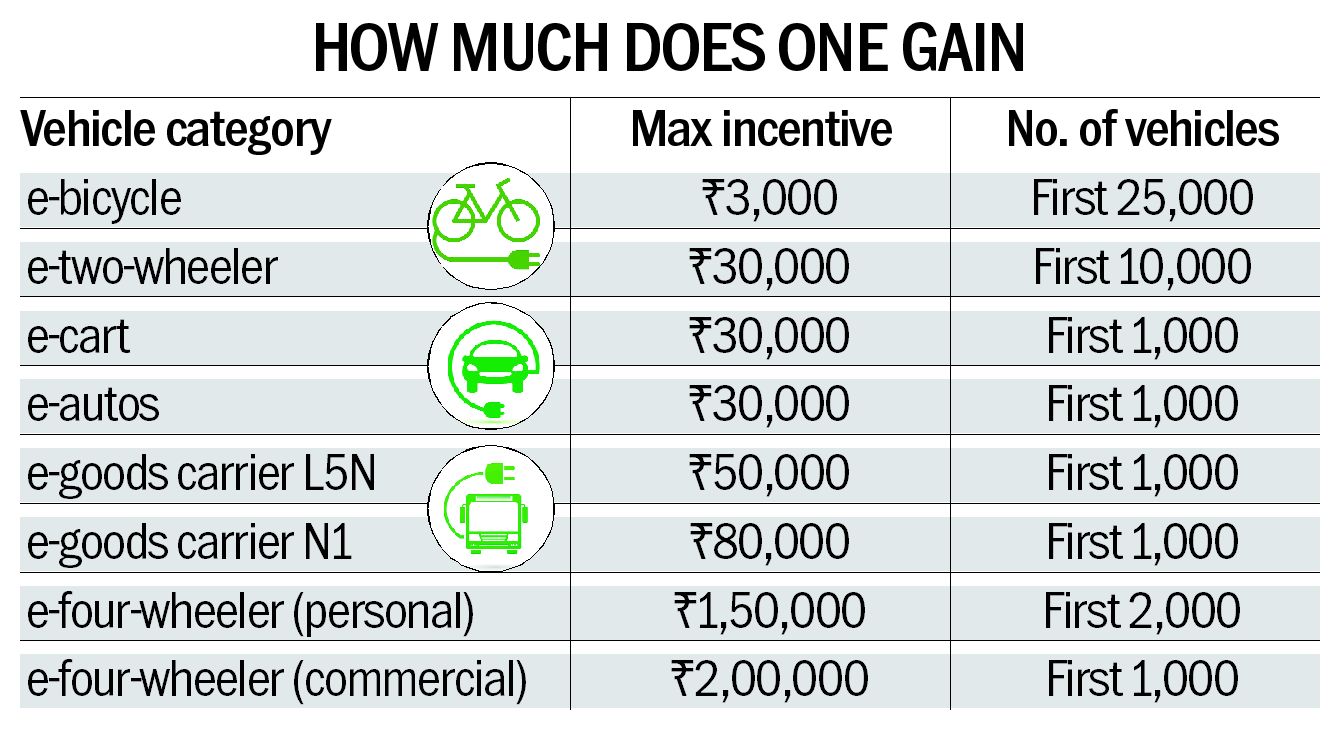 However, the incentive will be given at the rate of Rs 5,000/kWh capacity of the fixed battery for all categories of electric vehicles except e-bicycles and e-four-wheelers (commercial) as proposed in the Draft EV Policy notified recently to invite, if any, suggestions or comments for inclusion or omission in the policy.
However, the incentive for e-bicycle would be given at the rate of 25 per cent of the cost of the cycle up to the maximum of Rs 3,000 and for commercial e-four-wheeler, it would at the rate of Rs 10,000/kWh capacity of the fixed battery.
On passing of the benefit, an official said they were finalising the policy and the incentive was likely to be passed directly to the dealer to avoid paper work at the buyer’s end. However, separate guidelines would be incorporated in the policy on availing of the incentive.
Facing several challenges, including high upfront purchase cost in comparison to internal combustion engine vehicles, the UT Administration will provide incentives to encourage adoption of all categories of electric vehicles, including e-bicycles, e-two-wheelers, e-carts, e-autos, e-goods carrier (L5N and N1) and e-four-wheelers (personal and commercial).
The policy proposes the maximum incentive of Rs 3,000 to be given to the first 25,000 bicycles purchased during the policy period. Similarly, the maximum incentive of Rs 30,000 will be given to the first 10,000 electric two-wheelers, Rs 30,000 to the first 1,000 e-carts and e-autos each, Rs 50,000 to the first 1,000 goods carriers L5N, Rs 80,000 to the first 1,000 goods carrier N1, up to Rs 1.5 lakh to the first 2,000 four-wheelers (personal) and up to Rs 2 lakh to the first 1,000 four-wheelers (commercial).
Besides, the policy also has a provision for early bird incentive, which would be the maximum of Rs 2,000 for e-bicycle and up to Rs 50,000 for all categories of vehicles. The early bird scheme will be applicable to vehicles registered within the first year of the policy period.
All incentives will be over and above the FAME-II policy incentives of the Central Government and will be applicable only to electric vehicles to be purchased and registered in Chandigarh.
The road tax and registration fees will be waived for all eligible vehicles registered during the policy period. The policy will be valid for a period of five years from the date of notification with a detailed review to be undertaken annually or as required.
Tribune Shorts
A –
A +
What do you think? (Share your feedback)
Most Read
Don’t Miss
SUBSCRIBE TO OUR NEWSLETTER
Revoke bond or won’t join duty, warn Kashmiri Pandits

High Court: Hand over plots to Kashmiri Pandits without formalities

House burgled, suspect handed over to police by area residents

Minor among 2 raped in Amritsar

Over 1K pedal 8.4 km at Bicycle Day rally in Chandigarh

Delhi govt installing 500 tricolours across city; forms volunteer committees to look after them

1 in 3 Delhiites feel air pollution problem will be resolved with AAP forming government in Punjab: Survey

No new Covid case in Ludhiana

Another inmate attacked in jail

The Tribune, now published from Chandigarh, started publication on February 2, 1881, in Lahore (now in Pakistan). It was started by Sardar Dyal Singh Majithia, a public-spirited philanthropist, and is run by a trust comprising four eminent persons as trustees.
The Tribune, the largest selling English daily in North India, publishes news and views without any bias or prejudice of any kind. Restraint and moderation, rather than agitational language and partisanship, are the hallmarks of the paper. It is an independent newspaper in the real sense of the term.
The Tribune has two sister publications, Punjabi Tribune (in Punjabi) and Dainik Tribune (in Hindi).
Remembering Sardar Dyal Singh Majithia
Designed and Developed by: Grazitti Interactive