Yet, electric cars still made up less than 10% of the global car market in 2021, which means there’s exponential growth potential ahead for the industry and players making the right moves. Here are three such promising EV stocks that look poised for a mega bull run.
Ford‘s (F -2.81%) F-150 pickup trucks have ruled American roads for several decades now. The auto giant now wants to do an encore with the electric version of its popular pickup. After working on it for nearly four years, Ford officially launched the F-150 Lightning fully electric pickup truck and started full production on April 26.
Ford has secured nearly 200,000 reservations for the F-150 Lightning and isn’t taking any more orders. Instead, it plans to double production capacity at its Michigan facility to meet the unprecedented demand for the pickup. At the same time, Ford also said it’ll triple production of the Mustang Mach-E to 200,000 units by 2023.
These big moves are part of Ford’s plans to invest $30 billion in EVs through 2025. Ford has big ambitions: It wants to become the “No. 2 electric vehicle maker in North America” in a couple of years, and then aim for the top spot as its EVs and battery-manufacturing facilities come online. By 2026, Ford expects to sell two million EVs annually.
Image source: Ford.
In fact, consumer interest in the F-150 Lightning is already so high that during Ford’s last earnings conference call, CEO Jim Farley even stated the company could rival Tesla‘s (TSLA -9.22%) Model Y as the best-selling EV in the U.S. if it had enough production capacity to meet current demand.
Farley’s statement alone should give investors a glimpse of what Ford’s future could look like in a world dominated by EVs. It looks bright, to say the least, and with demand for Ford’s traditional vehicles also skyrocketing, Ford stock should charge higher from here.
In 2021 when EV sales more than doubled worldwide, sales in China alone nearly tripled. China is currently the world’s largest market for electric vehicles, but this is just the beginning as battery EVs still made up barely 2% of the nation’s total vehicle fleet last year, according to China-based new energy vehicle (NEV)-focused website CnEVPost.
One company that’s already crushing China’s EV market is BYD (BYDDY -2.03%). If you haven’t heard much about BYD, here are some stunning facts about the company:
That last point is particularly noteworthy as BYD is the first automotive company to discontinue gasoline vehicles altogether. It’s a big move that reflects BYD’s confidence in its growth potential in the NEV market. And it’s not just China — BYD is already expanding into Europe, manufactures electric buses in the U.S., and recently launched its flagship sedan, Han EV, in Brazil.
BYD just reported a whopping 241% year-over-year jump in net income for the first quarter, driven by a more-than 400% growth in NEV sales. BYD clocked the highest sales growth in global EVs between 2020 and 2021 among all major automakers, including Tesla (TSLA -9.22%). One look at this eye-opening chart and it’s possible to believe this Warren Buffett stock could be unstoppable.

While BYD is primarily into commercial vehicles, there’s another EV maker that wants to rule the passenger EV market in China — Nio (NIO -4.08%).
Nio currently focuses on premium electric cars and is among the leading players in the industry, but it aspires to build affordable mass-market EVs. Nio has often said it wants to build better cars than Tesla at lower costs, and it even detailed plans in its last earnings conference call. Unlike Tesla, Nio doesn’t want big gaps in the prices of its models and is targeting mass-market cars priced within a range of $30,000 to $50,000 per car.
Of course, a mass-market EV is still years away. Until then, Nio’s new launches and expansion plans should help boost its stock price. On April 27, Nio rolled off its 200,000th EV, having built that many since 2018 when the company started operations. Notably, Nio produced 50% of those vehicles in just the past year, which shows how rapidly the company ramped up production to compete in the ever-growing Chinese NEV market.
There’s more to come, what with Nio planning to start production at its second manufacturing facility in China in the third quarter this year. This facility should support the company’s new launches lined up for the year, including the flagship ET7 sedan that Nio began selling in late March. Nio expects its research and development expenditure to more than double in 2022. Nio’s vehicle designs and technology have even caught the attention of popular investor Cathie Wood, who recently bought shares of Nio for the first time. 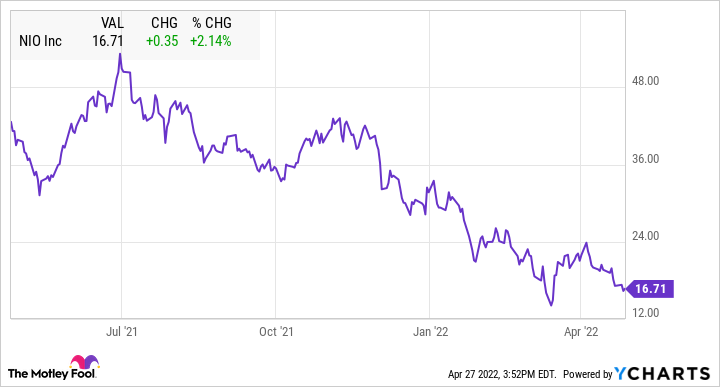 NIO data by YCharts
Above all, Nio expects to break even in 2023 and turn its first profit in 2024. To hit that milestone, Nio will have to narrow its losses rapidly going forward. Any development to that effect could send Nio shares skyrocketing, especially after the stock’s steep fall in recent months.

*Average returns of all recommendations since inception. Cost basis and return based on previous market day close.
Market-beating stocks from our award-winning service.
Calculated by average return of all stock recommendations since inception of the Stock Advisor service in February of 2002. Returns as of 06/05/2022.
Discounted offers are only available to new members. Stock Advisor list price is $199 per year.
Calculated by Time-Weighted Return since 2002. Volatility profiles based on trailing-three-year calculations of the standard deviation of service investment returns.

Invest better with The Motley Fool. Get stock recommendations, portfolio guidance, and more from The Motley Fool’s premium services.
Making the world smarter, happier, and richer.