Use earnings of 'The Kashmir Files' for Pandits' rehab: AAP MP – The Tribune India

A –
A +
Updated At: Mar 29, 2022 10:43 AM (IST)
Since the release of The Kashmir Files, several protests against as well as in favour of the film have been seen across the country.
Tribune News Service

New Delhi, March 28
In a Zero Hour notice, which was submitted to the Rajya Sabha Secretariat today, AAP member Sanjay Singh demanded release of the movie, The Kashmir Files, on Youtube and Doordarshan (DD). He said the commercial gains made by the filmmakers should be used for rehabilitating Kashmiri Pandits. 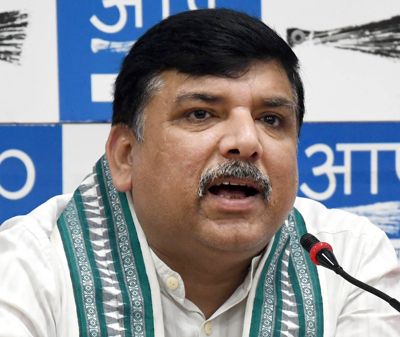 In the letter to the secretary general of the Rajya Sabha, Singh said, “Efforts should be made to rehabilitate the Kashmiri Pandits. The film made a profit of around Rs 200 crore. The money earned should be used in the rehabilitation of Kashmiri Pandits.”
Zero Hour notice couldn’t be read
However, Singh could not read out his Zero Hour notice as the House proceedings got adjourned amid protest by Opposition members over the rise in fuel prices and the two-day strike call given by the trade unions in the country.
The Vivek Agnihotri-directed movie that was released in theatres on March 11 stars Anupam Kher, Mithun Chakraborty, Pallavi Joshi, Darshan Kumaar and others. It revolves around the genocide of Kashmiri Pandits in 1990 and the film recently crossed Rs 200-crore mark at the box office.
The film has been declared tax-free in several states, including Uttar Pradesh, Tripura, Goa, Haryana and Uttarakhand.
Since its release, the film has stirred political debates with the Opposition attacking the ruling BJP at the Centre for not doing enough to address the plight of Kashmiri Pandits.
Delhi Chief Minister Arvind Kejriwal, who has been facing backlash on social media for his recent remarks on making the film tax-free in the state, had on Saturday said that the money earned from the business generation of the movie should be used for the rehabilitation of Kashmiri Pandits and efforts should be made to bring them back home.
“In the last 25 years, since the exodus of Kashmiri Pandits, there has been a BJP government at the Centre for 13 years. The BJP government has been there for the last 8 years, but not even a single Kashmiri Pandit has been settled back there,” Kejriwal had said.
#kashmiri pandits #sanjay singh #the kashmir files
Tribune Shorts
A –
A +
What do you think? (Share your feedback)
Most Read
Don’t Miss
SUBSCRIBE TO OUR NEWSLETTER
Hyderabad teen gangrape: 3 minors among 5 booked, 1 held
Police official say son of an MLA was not among the five acc…
Hundreds of Pandit families flee Kashmir in dead of night; Amit Shah holds high-level meet
Two non-locals hurt in Shopian grenade attack
Sidhu Moosewala’s parents to meet Amit Shah in Chandigarh today evening

House burgled, suspect handed over to police by area residents

Over 1K pedal 8.4 km at Bicycle Day rally in Chandigarh

1 in 3 Delhiites feel air pollution problem will be resolved with AAP forming government in Punjab: Survey

Manish Sisodia will soon be arrested in a ‘fake’ case, says Arvind Kejriwal

No new Covid case in Ludhiana

Another inmate attacked in jail

The Tribune, now published from Chandigarh, started publication on February 2, 1881, in Lahore (now in Pakistan). It was started by Sardar Dyal Singh Majithia, a public-spirited philanthropist, and is run by a trust comprising four eminent persons as trustees.
The Tribune, the largest selling English daily in North India, publishes news and views without any bias or prejudice of any kind. Restraint and moderation, rather than agitational language and partisanship, are the hallmarks of the paper. It is an independent newspaper in the real sense of the term.
The Tribune has two sister publications, Punjabi Tribune (in Punjabi) and Dainik Tribune (in Hindi).
Remembering Sardar Dyal Singh Majithia
Designed and Developed by: Grazitti Interactive