Two-wheelers have long been a cornerstone of life in India — their smaller size and affordability make these traditionally gas and diesel-powered vehicles a go-to means of navigating the traffic-jammed streets of the country’s most populous cities.
Now, a new startup called River has come out of stealth with an electric two-wheeler scooter — and accompanying subscription services — designed to appeal to modern-day consumers looking for an affordable, yet stylish, vehicle that can be used for work, play and every task in between.
River, founded in late 2020 by Aravind Mani and Vipin George with $2 million in backing from Maniv Mobility and TrucksVC, has grown to 42 people in its short life. Its small and growing team, who hail from companies like Ather, Arai, Bosch, Honda, Ultraviolette and Vespa, have developed a prototype vehicle that will be unveiled to consumers later this year.
Both founders also have experience in two-wheeled transport. Mani, an engineer who once worked in the petrochemicals industry before switching to electrified transportation, was most recently vice president of business strategy at Ultraviolette before he left to form River. George worked at Honda R&D in India for eight years, including as head designer, and most recently was design lead at Ultraviolette.
The pair wanted a two-wheeler robust enough to be used as a tool for work or any other task while amping up the performance and style to make it useful and fun for all of the other hours in the day.
“A parallel would be the truck culture in the United States; if you’re a carpenter or shop owner you have a truck, which you use to carry stuff and it’s also your primary mode of commute,” Mani said. “We don’t have anything similar on the two-wheeler space in India, and that’s what we want to create.”
At the same time, Mani noted the vehicle also had to have personality because “in India it is still a status purchase that you want to show off to your friends; it is a first symbol that you have arrived in life for many people owning a two-wheeler.” 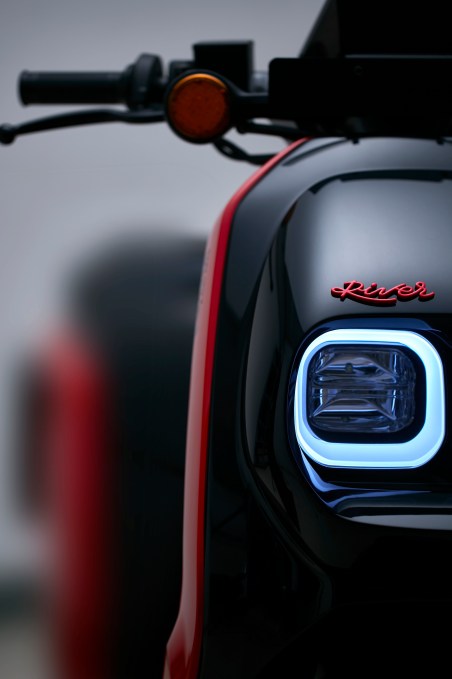 Image Credits: River
What they came up with is a “multi-utility” two-wheeled electric scooter codenamed the RX-1 that is available in several battery pack sizes that can travel between 100 km (62 miles) and 180 km (112 miles) on a single charge.
The vehicle can accelerate from zero to 40 kilometers per hour (25 mph) in 4 seconds and has a top speed of 80 kmph (50 mph). And because its main focus is as a multi-utility vehicle, it has a payload of 200 kilograms, enough for a rider to carry packages.
The price, which depends on the battery pack, ranges between 80,000 INR ($1,070) and 100,000 INR ($1,337).
River’s launch comes at a fruitful yet fiercely competitive moment in India.
India’s government, keen to accelerate the adoption of EVs in an effort to get away from polluting gas and diesel-powered vehicles, have increased subsidies for electric two-wheelers made in the country. India’s Department of Heavy Industries now offers incentives that provides Rs 15,000 ($200) per kilowatt-hour. The cap on subsidies has also doubled to 40% of the price of the vehicle.
At the same time, there is also an effort by e-commerce and delivery companies, including Flipkart, Swiggy and Zomato, to electrify fleets. Zomato plans to have EV-only fleets by the end of the decade. Startup Swiggy announced in August it would cover 800,000 kilometers (497,000 miles) every day via electric vehicles by 2025. In February, Walmart-owned Flipkart said it would deploy more than 25,000 electric vehicles in its supply chain by 2030.
“About 60% to 70% of the country is self-employed and two-wheelers are a basic part of the Indian livelihood,” co-founder Aravind Mani said in an interview, adding that e-commerce has driven growth with an estimated 14 million fleet delivery riders in India today. “COVID has actually accelerated this trend, and on-demand services are continuously increasing.”
These opportunities have fueled the launch of hundreds of EV startups. There are more than 470 EV companies registered in India, according to March 2021 research notes from Sanford C. Bernstein & Co.
“The gold rush to capture this emerging opportunity has commenced,” the report from managing director and senior analyst Venugopal Garre said. “A few will get acquired, several will perish, some will remain low-scale niche OEMs, but we think a few will scale up materially.”
River is going up against bigger and better funded competitors like Ola Electric, Bounce and Aether Energy, as well as dozens of smaller outfits. But River’s co-founders contend their new vehicle and business model fills a gap in the market.
River plans to sell directly to consumers and offer a suite of subscription services and an array of accessories that lets owners customize their scooters and remove them as their needs change throughout the day. Sales are expected to begin in the second half of 2022.
The company plans to offer charging, battery packs that will range in size, maintenance and connectivity packages offered through subscriptions. River is not going to take on the costly task of building out charging infrastructure. Instead, the company plans to operate a charging franchise system. Mani said the company is already working on a set of small businesses that might buy the vehicles and chargers and open up the chargers for public use.
River wants to sell its scooters directly to businesses like restaurants, as well as to fleet operators and even larger e-commerce companies that can sell to consumers.
The startup will assemble the scooters at what Mani described as “small-scale manufacturing facilities” that can turnout around 3,000 vehicles a month. If successful, River wants to create a number of these facilities throughout India. Mani said River has reached initial agreements with several suppliers, including for the co-development and assembly of its battery packs.